Do you like gold chains? Most, if not all of us, certainly do. Go to a jewelry store and you’ll find a wide variety of them, different styles designed for various uses, for both men and women. Am I right? That’s a rhetorical question. Personally, I don’t have any because I’m just not into jewelry. Some men are; just ask Mr. T (remember him?)! Our oldest son, when he was about 4 years old, just about had a fit when he say what I called a ‘Mr. T Starter Kit’ and Mom didn’t want to buy it for him.

Nevertheless,. There is one Golden Chain that many believers (if not most of us), aren’t all that fond of. It’s the Golden Chain of Redemption and it’s found in Romans 8, Verse 29-30:

Essentially, what we have are five links in an unbreakable chain, about a group of people who were ‘foreknown’ by God and also ‘predestined’, ‘called’, ‘justified’, and ‘glorified’.

The next two links are inside of time as we know it. Each person in this group of ‘foreknown’ and ‘predestined’ ones is ‘called’ and ‘justified’ during his/her  lifetime, in preparation for the final link, ‘glorification’, when they are all raised in newness of life to be with Jesus forever. Is that beautiful, or what!?

The chain is unbreakable in at least two ways. First, it is God who is performs all of the actions represented in these 5 golden links. If that isn’t enough to prove the indestructible nature of our chain,  each of these Divine actions is presented to us in the past tense, meaning that from God’s perspective, it’s a done deal! Each and every person of whom this text speaks, everyone ‘foreknown’ of God WILL be ‘glorified’!

The question for you today, my friend, is this:

“Are you to be found somewhere in this Golden Chain?”

I can assuredly proclaim that if you have been convicted of your condition in sin, have repented of it, and believed in Christ as your Savior and Lord, you are not only ‘found in’ this Chain, but you are eternally secure in its warm embrace! If you are a believer in Christ you were indeed ‘foreknown’ by God, ‘called’ by God into a Holy life, ‘justified’ by the blood of Christ and will one day be ‘glorified’!

This is cause to rejoice and be exceedingly glad! 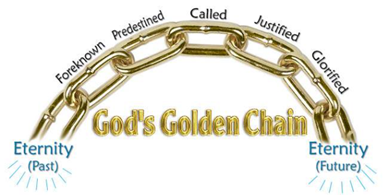 7 responses to “The Most Precious Golden Chain?”