NOTE: There are many other such memes that appear across multiple FB pages that claim to be Christian. Trust me.

I must confess that I don’t much care for FB memes that want/challenge me to reply to them, whether or not they are ‘Christian’ themed. I especially dislike the ones that insult me if I do not reply. I would see them in my FB feed because a friend or family member had liked the posts – after all they contained ‘feel good’ sayings.

My curiosity, however got the best of me and I started digging, in order to find out more about the ‘owners’ of some of the FB pages, using the posted ‘About’ information. What I discovered was definitely ‘interesting, to say the least. Here are a few of my findings:

All of the pages I visited offered a link for starting a chat in Messenger with the results shown on the following pages, which were nothing more than ‘canned’ responses with my name inserted, inviting further chat correspondence. Here are some graphics from FB pages I visited and from which I tried to find out more information: 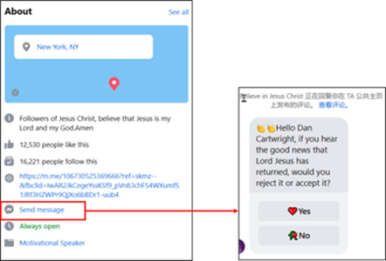 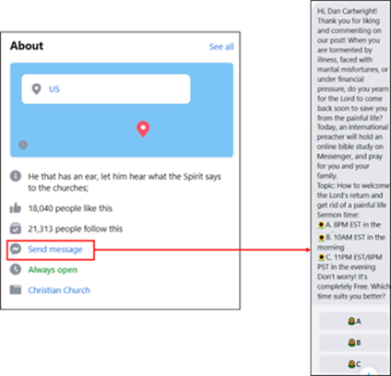 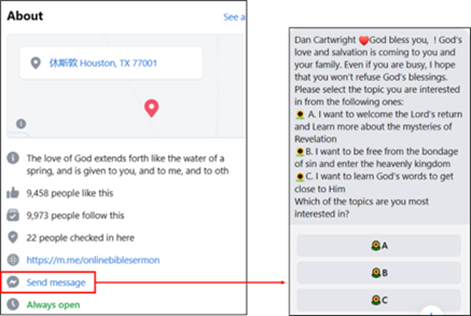 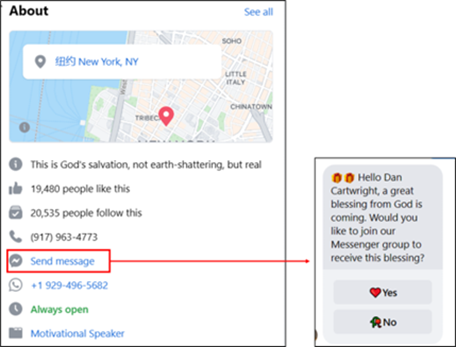 Other similar pages I visited and examined, but didn’t capture any graphics.

I also found rather interesting the other ‘canned’ responses sent from the ‘Authors’ of the various sites. Below are some samples from various sites and some were replies to me. I invite you to pay attention to the similarities as well as the interesting language and grammar:

NOTE: The above quote from “God’s word” has no Scripture citation, just the quote. I found other such “quotations” on other pages.:

The above samples are a small set of canned ‘Author’ replies that appear repetitiously throughout single FB pages and across multiple pages. Occasionally, there might be a reply from the page author with a name attached that seems to have just another ‘canned response. I didn’t dig further. At the same time, there were a lot of legitimate replies from actual readers. Sadly, most, if not all replies from the page authors still seemed canned.

As a final note, I also Googled “Fake Christian Facebook Pages” and found some interesting articles, many of which contained information from an article published by Ministry Watch, a highly reputable source. You can find it at: Fake Facebook Pages Lure Millions of Careless Christians – MinistryWatch. The article offered the following as a summary:

“. . . instead of practicing discernment, too many Christians engage social media content therapeutically, and that doesn’t bode well for discipleship or democracy.

They use content to make themselves feel good, like narcotics, and they don’t care where it comes from as long as it makes them feel good. But the payoff is that we are supporting groups engaged in cultural hacking, groups that are injecting more conflict and discord into American culture.”

While the Ministry Watch article discussed some of the political agendas of those who produce fake FB pages, I am also not saying that the examples I included in this article might have a political agenda down the road, but they are sure are “fishy”, at least in the mind of this old soldier with an intelligence background.  I am saddened to see so many professing Christians responding as asked without closer looks,

Have a blessed day, as well as a happy and productive New Year in the service of the King!