The introduction to this book at Monergism.com, states the following: 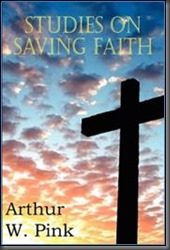 One of the most helpful books we have ever read on the gospel. Pink’s deep understanding of the nature of regeneration and how that relates to faith and works is top notch. Pink levels the serious and solemn charge that much “evangelistic” preaching falls short on delivering the true gospel message. He states, “The ‘evangelism’ of the day is not only superficial to the last degree, but it is radically defective. It is utterly lacking a foundation on which to base an appeal for sinners to come to Christ. There is not only a lamentable lack of proportion (the mercy of God being made far more prominent than His holiness, His love than His wrath), but there is a fatal omission of that which God has given for the purpose of imparting a knowledge of sin. There is not only a reprehensible introducing of ‘bright singing,’ humorous witticisms and entertaining anecdotes, but there is a studied omission of the dark background upon which alone the Gospel can effectually shine forth.” Whether you are a preacher or a layperson, this remarkably relevant study in Scripture will challenge you to hold firmly to the Gospel.

I’ve just finished my first reading and I have to say that I was blessed beyond measure in ways too numerous to mention in this article. The book proper is divided into four parts; Part I – Signs of the Times (Introduction), Part II – Saving Faith, Part III – Coming to Christ, and Part IV – Assurances. Parts I – IV are divided into logical and easily understandable subsections and thoroughly supported from Scripture.

Sometime after completing his most thorough treatment on saving faith, he decided to further amplify one or two of the leading points with the hope that some might be helped thereby, in the form of four dialogues. The simulated, but completely relevant and believable dialogues, between ‘The Writer’ and two gentlemen, ‘Mr. Carnal Confidence’ and ‘Mr. Humble Heart’, actually summarize the entire content of the earlier parts of the book, expressed in language quite familiar to early 20th century readers, yet at the same time easily understood today.

Studies on Saving Faith is available for download without cost at Monergism.com and the Members Only section of the Christian Military Fellowship Website here, and also available for purchase at Amazon.com, as well as from numerous Christ book distributors.

It’s a familiar story found in John, Chapter 9. It was a Sabbath Day in Jerusalem.  Jesus and his disciples were walking the city streets when Jesus noticed a Jewish beggar who had been blind from birth, which set off an interesting chain of events.

Relying on Jewish tradition, the disciples asked Jesus, “Rabbi, who sinned, this man or his parents, that he was born blind?”  Jesus told them that no one’s sin caused the blindness and that the poor man was blind so that the works of God could be made manifest.

Jesus healed the man’s blind eyes by anointing them with mud and spit and telling him to go and wash in the nearby Pool of Siloam. The begger went, washed, and returned with his sight completely restored!  Neighbors and others who knew the man were divided as to whether this was the blind beggar, or just someone who looked like him.  When they asked him how he received his sight he simply told him the story of what had happened.

The man was hauled off to the Pharisees in the synagogue (it being the Sabbath and all), where he received the third degree from the religious leaders who were conflicted about the matter.  Some said the man who had healed the blind man had violated the Sabbath while others were puzzled how such an obvious ‘sinner’ could have performed such a miracle!  After all, working on the Sabbath was a sin and therefore, the man who had performed the healing had to be a sinner. They asked the blind man what he thought about the man who healed him and he answered “He is a prophet.”

The angry and still-confused Pharisees had the man’s parents brought in and asked them if the formerly-blind man was their son. They admitted that he was, but were too scared to admit to a possible miracle and played the “We know nothing, ask him!” card like Sgt Schultz (Hogan’s Heroes).  So the Pharisees questioned him again, reminding him that Jesus was a ‘sinner’ (sinners don’t go around healing people) and asking him how his eyes were really opened.

Then came the classic response, “Whether he is a sinner I do not know.  One thing I do know, that though I was blind, now I see.”

That was the last straw, and the man was angrily ejected from the synagogue (excommunicated), the worst thing that can happen to a practicing Jew!  What happened next was the most wonderful and astonishing climax to a long day:

What can we learn from the events of that long ago Sabbath Day?  Trust me, there is much we can, and have learned through the years.  But as Alistair Begg commented in a sermon about the events that day, “Not only do we have here an illustration (the blind beggar) of saving faith, and not only do we have here the impact of saving faith in a life in that he worships, we have an example of what we may do endeavoring to lead men and women to faith in Jesus.” (From the sermon “Lord I Believe” & the Sermon Series “A Light in the Darkness” John 9:38 (Aug 27,2006))

In the sermon, Alistair then tips his hat to Charles Spurgeon, who outlined the principles Jesus used in the healing of a blind Jewish beggar (From the sermon “A Pressed Man Yielding to Christ”, delivered October 12th, 1882 at The Metropolitan Tabernacle Evening Service):

1. “If you have a choice as to those to whom you go, seek out the oppressed.”  Yes, we are commanded to go, “into all the world, and preach the gospel to every creature”; but if we are able to pay particular attention to some more than others, “seek out the sick, the sad, the weary, the poor, the broken-down ones, and especially such as have been put out of the synagogue.”  Out of all the busy people in the streets Jesus noticed and singled out the blind beggar, first to bring healing and later to identify himself as the Son of God.  The hurting and disenfranchised are “likely soil for the good seed of the kingdom to grow in, and bring forth fruit. Those whom nobody else wants, and nobody else will have, our blessed Lord and Master delights to receive.”

2. “Next, when you come to close quarters with them as Christ did, ask them questions.”  Jesus asked the blind beggar, “Do you believe in the Son of Man?”  It was a very pointed and personal question.  As Spurgeon put it, the preacher in the pulpit can “fire the gospel gun, and the shot flies where God directs it;” but the person in the pew (you) who loves the Lord, can, as it were, “hold a pistol close to the sinner’s head.”  You can deal with the lost and hurting on a personal level, one by one, and call them to respond directly to a direct and very personal question.  When the time is right, ask just like Jesus asked, “Do you believe?”  That is the way to win souls, begin with a personal question.

3. “Next, be ready to answer enquiries.”  This is what Jesus did when he revealed himself to this man.  When Jesus asked him, “Do you believe in the Son of Man?”  the man answered, “And who is he, sir, that I may believe in him?”  Jesus said to him, “You have seen him, and it is he who is speaking to you.”  He said, “Lord, I believe.” When you are asked a question tell them everything you know in answer to the question, and if can’t tell them everything they want to know, take them to someone who is more advanced in spiritual matters, so that with prayer, patience and loving instruction,  they can be lead to Christ.

4. “Next, pray to the Lord Jesus Christ to reveal himself to them, for that is the way faith comes.  We cannot speak of Christ as He should be spoken of; but, when He reveals himself, then the sinners see him.”  All of the mere words we speak in leading someone to Christ will be fruitless unless accompanied by the power of the Holy Spirit himself working in the heart of the hearer. “All the portraits of a beauty never touch the heart like one glance from her eyes; and all the portraits of Christ, that ever were painted by his most admiring disciples, never make such an impression on the heart of man as when once he says, as he said to this man, “You have seen him, and it is he who is speaking to you.”  None but Christ himself can preach Christ to the full. He must reveal himself, or the Spirit must reveal him, or else men do not see him.”

5.  Finally, glorify Christ by your personal testimony.”  Remember Jesus’ high priestly prayer, in which he said, “I do not ask for these only, but also for those who will believe in me through their word,” meaning the word of his disciples through all the ages of history.  Even though it is the word of Christ we speak, when it comes from deep in our own hearts, from our own experience, it is also our word bringing salvation to the lost and dying.

The above article was first published in the Christian Military Fellowship April 2021 Newsletter, downloadable here.