“Which of you, wishing to build a tower, does not first sit down and count the cost to see if he has the resources to complete it? Otherwise, if he lays the foundation and is unable to finish the work, everyone who sees it will ridicule him, saying, ‘This man could not finish what he started to build.’ Or what king on his way to war with another king will not first sit down and consider whether he can engage with ten thousand men the one coming against him with twenty thousand? And if he is unable, he will send a delegation while the other king is still far off, to ask for terms of peace.”  Luke 14:28-35

As Christ taught us, let’s count the cost of our lost war.

You can see in the infographic below, courtesy of Statista, how some of these stats have changed – in fact, gotten worse – over these past years. 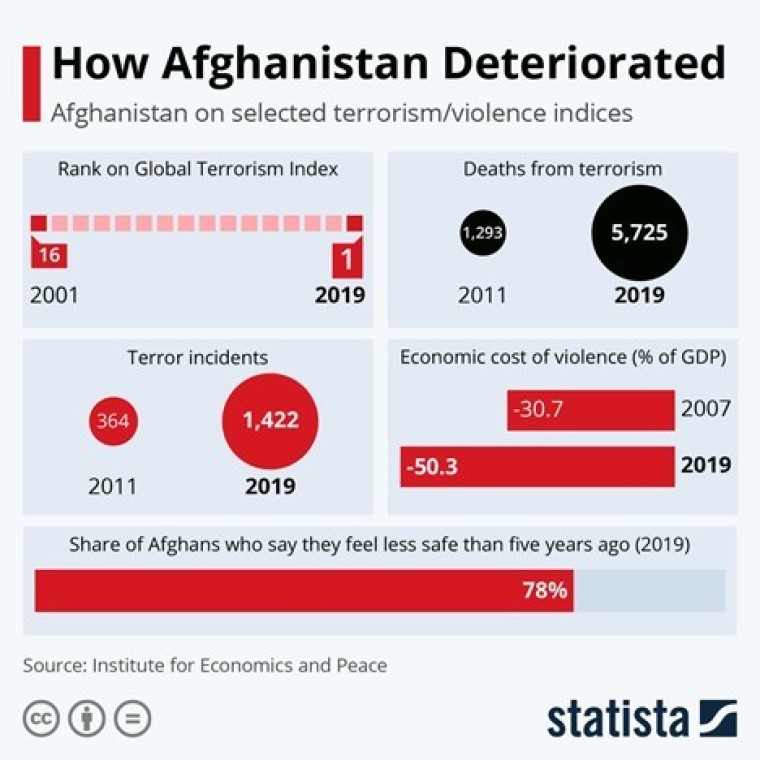 This is the legacy of the War in Afghanistan: more terrorism, more instability, and more violence. Despite the UN, despite the World Bank, despite the IMF, despite the American, British, Canadian, French, German, and Italian military, Afghanistan in many ways is in a worse position today than it was even 20 years ago.

The excellent Orthodox conservative writer Rod Dreher recently pointed out that the War on Terror was bookended by men jumping out of American buildings to certain death on September 11th, and men falling off American planes to certain death twenty years later. This outcome was surely unimaginable to President Bush in 2001 when he ordered the invasion, or to President Obama in 2009 when he ordered a surge of US troops; that’s because they didn’t count the cost. Let’s go back, as we always should, to Him whose warnings our ruling class did not heed.

During Christ’s infancy, shortly after the death of Herod “the Great,” a rebel by the name of Judas attacked the Galilean city of Sepphoris and organized an armed revolt against the Herodian dynasty. Unlike that of his forebearer, Judas Maccabeus, this Judas’ revolt failed. According to the historian Josephus, Rome’s Syrian governor burned the city down and sold its inhabitants into slavery.

Sometime during Jesus’ teenage years, Sepphoris was rebuilt by Herod Antipas. Given their profession, and that they lived in nearby Nazareth, it’s likely that Christ joined with His stepfather in rebuilding the city. The young Jesus would have spent days toiling away in the shadow of decrepit former homes and businesses, as He built a new city in the rubble of a former rebel stronghold. (Sound familiar?)

Christ may well have been thinking of the failed revolt in Sepphoris when He spoke about war in Luke 14, just as Vietnam serves as the base-case for invasion and occupation for Baby Boomers, and as Iraq and Afghanistan for Millennials and Zoomers constitute the intellectual and emotional lens through which any possible war is filtered.

The Biblical perspective on war is, as one might expect, nuanced. Some conflicts – such as the Maccabean Revolt and the wars against the Amalekites, Midianites, and Philistines – carry divine endorsement. Some conflicts – such as the First Jewish-Roman War and the Bar Kokhba Revolt – carry divine punishment. Besides the obvious, two things separate the just and unjust war in Christian thought: the primacy of national sovereignty, and a reasonable expectation of victory.

First, God is not an imperialist. In 1 Peter 2:17 (“Honor all people, love the brotherhood, fear God, honor the king,”) the Greek word basileus is used, which generally means not emperor, but king. A king is sovereign over one nation; an emperor is sovereign over many. Godcreated the nations and divided them:

“When the Most High gave the nations their inheritance, when He divided the sons of man, He set the boundaries of the peoples according to the number of the sons of God.” Deuteronomy 32:8

Lest we think this is some temporary division of the Old Testament era, Saint Paul repeats this doctrine in speaking to (formerly imperial) Greek pagans:

“From one man He made every nation of men, that they should inhabit the whole earth; and He determined their appointed times and the boundaries of their lands.”

He, not us, made the nations. They are not man’s to play with; they are the creation of God, who went so far as to assign them spiritual principalities (see Daniel 10:13, Job 1:6, and, debatably, the aforementioned Deuteronomy 32:8.) Indeed, the very concept that there are laws of war – and therefore that some wars are unjust – comes from Christian thought, seen explicitly in the writing of the Arminian scholar Hugo Grotius. It was that same philosophy that resolved the Eighty Years’ War and Thirty Years’ War in the Peace of Westphalia, which legally instantiated the sovereignty of nations.

Were we honoring this principle in Afghanistan, where our presidents became de facto sovereigns of a foreign nation? Has our war of these past 20 years about redressing the crimes committed against us and protecting our rights and interests? Or was it about exporting our Western, liberal, democratic form of government to nations that have never known it and do not want it?

Even if we leave that aside, the issue of cost is glaringly obvious. What is required for a war to be just is that it be proportional to the crime and worth what we pay, whether financially, or in prestige, or in lives. If the mere presence of an evil foe was sufficient justification for war, Christ would have been encouraging a revolt against the Romans, not repeatedly warning against it. Taking up arms when one has no reasonable chance of victory is what Saint Peter did at Jesus’ arrest – prompting Him to tell Peter to sheathe his sword, “for all who draw the sword will die by the sword.” War must carry a realistic possibility of victory, and it must not be more destructive than the peace.

This does not describe the war in Afghanistan. The invasion of Afghanistan in October 2001 was justifiable – we were attacked, and the Taliban was aiding and shielding those who attacked us. What it became was something very different: a war for democracy; a war to enforce a very particular, modern, Western view of politics; a war to build a nation; a war that we did not count the costs of. We spent several times the GDP of Afghanistan to make it a liberal democracy, and we still failed, because the enterprise was absurd from the start.

Now, in the shadow of American humiliation and Afghan ruin, our foes are eager to pick up the pieces we broke. Expect China, Pakistan, Russia, and even India to reconsider their political and economic position in South and Central Asia, and not to America’s benefit – nor Afghanistan’s.

Over $2 trillion spent to remake a country with a GDP of under $20 billion in our image. Over $2 trillion, over 3,000 lives, and a country that is less safe than it was when we started. Christ told us to count the cost of war before it begins; we ignored Him. Now America joins the ranks of the British, the Soviets, the Mongols, the Greeks, and the Persians in the graveyard of empires.

Charles is a risk analyst and columnist at TownhallFinance. He has written for National Review Online, AsiaTimes, RealClearMarkets, and the Theopolis Institute. @charlesgbowyer