The FBI called it Operation Ghost Stories. The mission was to detect and expose the ten Russian deep cover agents who had been living in the USA since the mid 90s.

The spies snuck in unnoticed, and using forged birth certificates they assumed American identities. They bought homes in the suburbs of New Jersey, got jobs, enrolled in universities, and started assimilating into American culture, making friends with people in the government, and even having children together to cultivate the façade of innocuous soccer moms and baseball dads.

Their assignment was to channel classified information to Moscow Center. The problem was that they weren’t very good at it.

Fifteen years into the masquerade and they were still empty-handed. They never transmitted a single shred of classified information. They just seemed to be enjoying middle class suburbia while playing spy vs spy with no real effect. Their tradecraft would later be described in a report as sloppy and amateurish.

They would write messages to each other using invisible ink. You know, like kids do. They delivered information by swapping identical briefcases with other agents on the subway. Oooh sneaky. One spy filled out a form with the following fake home address: 99 Fake Street, USA. I kid you not.

And one of them, Richard Murphy aka Vladimir Guryev, had some really bad luck.

This hapless agent surreptitiously enrolled in a university to learn more about American culture. Then, per chance, the course advisor who was assigned to him happened to be the well-respected Russian-American professor Nina Kruchsheva. Vladimir kept insisting that he was a Philadelphia native named Richard Murphy, born to American parents, and had never even been to Russia. But he kept insisting all of this in a heavy Russian accent.

Dr. Kruchsheva told the FBI that she was constantly puzzled by his “… completely Russian behavior. …He had a thick Russian accent and an incredibly unhappy Russian personality.” (I find that charming evaluation especially endearing coming from a Russian lady).

In the spiritual realm there are also posers.

This repeated theme in Scripture should alert us to three implications:

1. A person’s profession of faith needs to be examined and bear fruit. You should not be offended if, for example in an interview to become a church member, you are asked to provide a testimony of your conversion. We should not be shocked when professing believers are exposed as unbelievers. 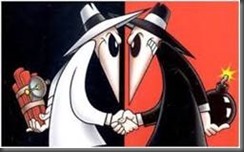 When a professing Christian turns away from Jesus, we need not doubt the doctrine of perseverance of the saints (the fact that God takes responsibility for keeping believers us saved). Rather, we should realize the one falling away was never really saved to begin with, and was masquerading all along.

3. Believers should thank God daily for our citizenship in Heaven, kept safe for us by his power (1 Pet 1:4). That eternal citizenship can only be obtained at birth, or more accurately, rebirth (John 3:5).

There is another chapter in Operation Ghost Stories. After the ten spies were arrested, they were not punished; they were exchanged. In the controversial prisoner exchange ten US citizens were released from prisons abroad as substitutes for their Russian counterparts.

As believers you can take comfort in knowing that though we were guilty of high treason against God, we get to go free. Through a dramatic substitutionary arrangement, God himself bore the eternal consequence of our crimes on the cross, in exchange for our freedom from sin, and thus purchasing for us priceless and irrevocable citizenship of Heaven.

That is an independence worth celebrating today and every day.

Clint Archer is the pastor of Hillcrest Baptist Church. He and his expanding troop of Archers live near Durban, South Africa (and pity anyone who doesn’t). When he is off duty from CGate, his alter ego blogs at Café Seminoid,